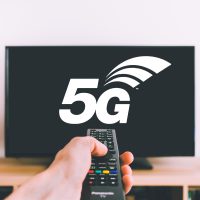 5G is arriving in 2019. We can hardly wait. Who doesn’t want internet so fast you can download a movie in less than 10 seconds? Life-changing! So why isn’t the entertainment industry buzzing with activity in preparation for the shift? 5G will massively accelerate cord-cutting among consumers who previously had only one option for high speed internet: cable, fiber or DSL. With super-fast internet delivered through the air, consumers that were stuck in a monopoly market will suddenly have a great alternative for internet access. This will lead to intense competition against the legacy cable providers on which conventional TV advertising still depends. As consumers switch to subscription-based entertainment providers like Hulu Plus, Sling, YouTubeTV, HBO NOW and other streaming services, the legacy TV ad business will atrophy. Advertisers who need to run video will have no choice but to move budgets from legacy TV to digital and smart TV targeting. This shift won’t happen overnight. It’s too big. But smart organizations will ride the edge of the wave by modifying their media plans sooner, rather than later.